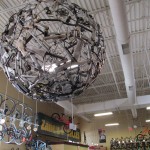 Shoreline Greenway Trail was there with a colorful photo display and lots of SGT handouts for customers.   Everyone enjoyed choosing favorite sculptures assembled from old bike parts, which hung from the ceilings and walls, enlivening the room. 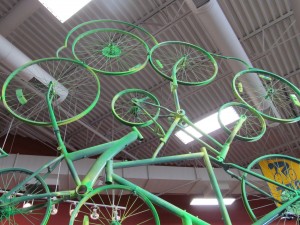 Zane’s bike store was a perfect environment to expose active people to the Shoreline Greenway trail’s vision to build a  trail for family bicycling as well as walking.

It was wonderful to speak to and enlighten people who didn’t know anything about the Trail, and to update those who already support the Shoreline Greenway Trail on the progress we’ve been making.  There was a steady stream of traffic by our table (being situated near the cookies and coffee helped!) and people were genuinely interested.

If you were there, thank you for listening to us and we hope to see you out on our Trail someday soon! 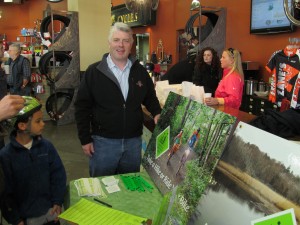 Special thanks go to Chris Zane, owner, for his continued support, and to Tom Girard, store manager, who welcomed our participation even during such a hectic time overseeing their major sales event of the year.