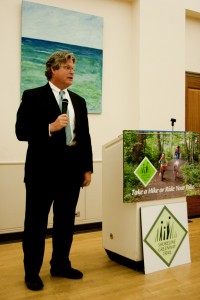 Connecticut State Senator Edward M. Kennedy Jr., outlined his environmental priorities, including support for the Shoreline Greenway Trail, at our annual celebration in Guilford in mid-May. An estimated 75 people attended as we updated Shoreline Greenway Trail members and the public on our progress and elected Judy Miller as chairperson to succeed co-founder Chip Angle.

CHANGING OF THE GUARD AT SHORELINE GREENWAY TRAIL

Chip Angle, a Guilford resident, had been chairman since we incorporated in 2003. He shepherded Shoreline Greenway Trail from a tiny group of passionate visionaries into a vibrant nonprofit organization with 2600 members, hundreds of volunteers and statewide reach. Under his leadership, nearly half our envisioned 25-mile trail from New Haven to Madison has been established, is under construction, or has been completed. Chip will continue as chairman of our fundraising effort—a significant priority as we reach major milestones in trail construction, and as interest in and support for hiking and biking trails in Connecticut increases. 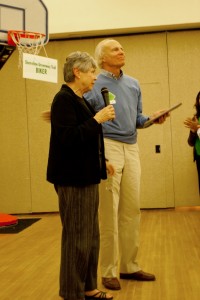 On behalf  of the Board of Directors, Judy Miller presented Chip with a plaque in appreciation of his dedicated 15 years of service to the organization, as a founder and as Chair.
Judy Miller, the new Shoreline Greenway Trail Chair,  lives in Branford  and has led that town’s effort since 2009.   In her new role, Judy updated attendees on trail development, and outlined the opportunities ahead in a political and financial environment favoring trail building.  She presided over the election of new and renewing board members. She vowed to strengthen Shoreline Greenway Trail while carrying on its mission to provide a safe, convenient and scenic way for people to walk, and bicycle along Connecticut’s shoreline.