Ted Braun, a Shoreline Greenway Trail Board member, an avid bicyclist and a retired educator,  has written a new book based on the diaries of his wife Deirdre’s great-grandfather, Llewellyn Barker, written from the age of 14 to 86, entitled  The Barkers of Branford: Life in America Through a Local Lens, chronicling the history of a family, of a town, of a nation. 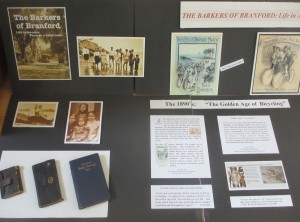 Ted welcomes you to join him in his presentation at the Blackstone Library sponsored by the Branford Historical Society on Wednesday, July 13th at 7 PM.  Ted will share from the following:

·       A Boy’s Life in the 1860’s
·       19th C Domestic Life
·       The Golden Age Of Bicycles
·       Prohibition Insights
·       Women Step Forward
·       19th C Branford Education
·       A Laborer’s View
·       Electrification & The Flush Toilet
·       The Great War
Of special interest to cyclists is his chapter highlighting bicycling in the last decade of the 19thcentury. Some excerpts from the chapter on “The Golden Age of Bicycling”:   ….Bicycling in the mid 19th century was more akin to a circus act than a means of transportation. It was both difficult and hazardous for the rider who was precariously perched above the enormous front wheel of the “high wheeler”.  Not until the 1880s, when the “safety bicycle” was invented, did bicycling gain widespread popularity.
…The later 19th century launched “The Golden Age of Bicycling” …. Mass production made it affordable for the average citizen.   A million bicycles were produced in 1897 alone.

….A New York Evening Post editorial in 1890 bemoaned the “Ravages of the Bicycle Craze” and noted theatre owners “have had the poorest season for many years” because men and women of every age were saving their money to “buy wheels”.

….“I went to the shop……I came home before 5 oclock and road back on my bicycle up to the town hall to carry in my tax list…Millard Farnham has got him a “pneumatic”   we road around the yard” 10/26/1892