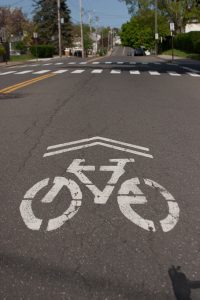 A $4,000 grant from The Guilford Foundation will enable the installation of shared lane markings on Guilford’s Whitfield Street between the town center and the harbor. Twenty reflective white markings, each depicting the outline of a bicycle with an arrow pointing in the direction of travel, will be painted in both directions on the roadbed from the Eagle Hose Company #2 firehouse south to the town marina.

The painting of the markings, facilitated by Shoreline Greenway Trail in partnership with the Town of Guilford, is among the ways the entities are working cooperatively to improve bicycle safety in Guilford. Their efforts also include the proposed stretch of multiuse, off-road trail beside Route 1 between Boston Street and the Madison line, which is before the Guilford Board of Selectmen for approval.

Whitfield Street is a heavily traveled cycling route between downtown Guilford and popular destinations such as the Shoreline East train station, the Guilford Yacht Club, several residential neighborhoods, Jacobs beach, the marina and restaurants. Whitfield Street was too narrow for a dedicated bike lane, and lane markings were the next-best solution, according to Shoreline Greenway Trail’s Kimberly Schmid.

“Painting shared lane markings on Whitfield Street is a small but important step in raising community awareness of the need to share the road while creating a more welcoming environment for cyclists,” she said. “Placing signage on the pavement increases the likelihood that drivers will be more careful and that bicyclists will safely ride with the flow of traffic. We appreciate the Guilford Foundation’s generosity and support of this commitment to public safety.”

The Guilford Foundation’s grant will cover the entire cost of the markings plus a kiosk on town land at the marina, showing a map for on-road cycling on Whitfield, Water and Boston Streets plus the future Route 1 Shoreline Greenway Trail section. Schmid expects the markings to be applied before winter.