Public Hearing Over, Route 1 Guilford Trail Section Heads Back to Board of Selectmen 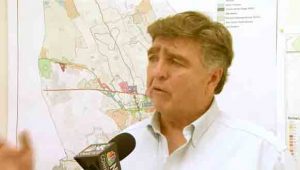 In an interview, Guilford Town Engineer James Portley explains the Route 1 trail section in this screen shot from NBC Connecticut.

Several hundred people packed the Community Center in Guilford on Tuesday night for a spirited and civil public hearing on the proposed, ¾-mile-long Route 1 stretch of Shoreline Greenway Trail. The section would run from Boston Street to the Madison line, where it could eventually connect with a section under development on the west side of Madison. It would serve primarily eastern Guilford and provide safe, off-road walking, biking and wheelchair travel for everyone alongside a dangerous stretch of Route 1.

The proposal is before the Guilford Board of Selectmen, who heard nearly three hours of comments from supporters and opponents. Several members of the SGT board spoke, as did SGT members, neighbors of the proposed trail and other Guilford residents. They made a strong case for the section and its benefits in safety, public health, clean air, economic vitality, quality of life and safe, active-travel connections between key destinations in Guilford and Madison.

Opponents appeared most concerned with future sections of trail, especially along Route 146 on the west side of Guilford, where no trail is currently planned. SGT’s Kimberly Schmid proposed that selectmen form a town-led committee to explore solutions to bike and pedestrian safety on 146, involving residents of the west side of town, the town engineer and representatives of bike- and pedestrian-interests, including Shoreline Greenway Trail.

The hearing broke up after 11 p.m., with selectmen making no announcement about when they plan to vote on the proposal. Here are links to some of the news coverage the hearing received:

Stay tuned for updates on this project.