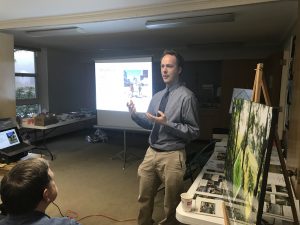 Shoreline Greenway Trail held its 2017 annual meeting on May 5 at the Tabor Lutheran Church in Branford. Unfortunately, heavy rains cancelled a planned walk of the Tabor property, where we expect to complete our next section of Branford trail, but we were pleased to have an excellent turnout for the meeting itself.

A brief formal meeting to elect members of our Board for 2017-2018 was followed by a presentation by New Haven City Engineer Giovanni Zinn. Zinn discussed the successful effort to make New Haven a Bicycle-Friendly Community (it currently has Bronze-level certification) along with the benefits and possibilities inherent in connecting the Shoreline Greenway Trail with New Haven’s network of bike routes, the Farmington Canal Heritage Greenway and the East Coast Greenway.

Working in partnership with Zinn and the city, SGT plans to extend its trail into the heart of New Haven. We previously had planned Lighthouse Point Park to be the trail’s western terminus.

Zinn has been New Haven’s city engineer since 2014 and has led or participated in many projects focused on sustainable and livable infrastructure. He has encouraged alternative transportation (including walking and cycling), promoted green building principles and worked to reduce the city’s carbon footprint through aggressive energy reduction.

After Zinn’s presentation, attendees enjoyed refreshments and good conversation. It was a great evening!