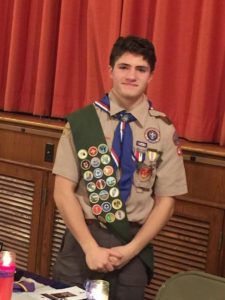 Judy Miller, SGT Chair,  and Jack Wood of the Branford SGT team attended the Eagle Scout Court of Honor for Christian Fillion on November 23rd at St. Theresa’s Church in Branford. It was a heartwarming and inspiring affair, as Christian was lauded by friends, family, and officials for his many achievements over the years, first as a Cub Scout, and now as an Eagle Scout.  The parish hall was filled with well wishers. Christian’s grandfather, Al Ramadei, opened the ceremony with a blessing. Christian’s brother, Max, was the Master of Ceremonies, and his brother, George, presented him with the Eagle Scout Charge. Jamie Cosgrove, Branford First Selectman, and Sean Scanlon, CT state representative, also attended.  Jack made remarks complimenting Christian on his leadership of Scouts and helpers as they built the SGT kiosk at the entrance to the Tabor Trail on Tabor drive. 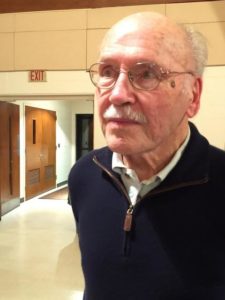